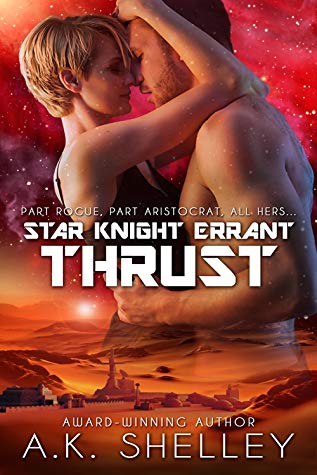 When Evander Mór transports to an unknown desert planet, his mission changes. Instead of brokering a peace deal, he’ll figure out what backwater he’s landed on and enjoy a well-earned weekend off with a gorgeous scientist. But when things get hotter than a supernova between them, he discovers he only has eighteen hours to stop an AI bent on murder, convince Cass he’s more than fiction, and find a way to cross the gulf between galaxies to bring her home.

Cass squinted at the wall screen. The call with Sylvia dropped mid-sentence—typical solar flare interference. Cass and the other Terran engineers worked miracles with rock, water, and bio-matter, but there was no getting around Mars’s feeble electromagnetic field. She glanced at the AI manual on her opaque crystal tablet while waiting for her friend to reappear.

Sylvia’s image blinked back on, mid eye-roll. Ever the confident space port commander, Cass’s best friend hated repeating herself. Unfortunately, calls dropped with regularity between Cass’s new station near the equator and the established colonies. They wouldn’t have proper communications until shielded lines ran from Elysium to Hellas, which would take years.

“As I was saying, your new place is barren. You need to paint. Throw art on the wall, pillows on the floor. Get plush rugs fabricated. Something, anything.”

Sylvia was right. The concrete monolith, aside from its gorgeous views of Elysium Planitia’s frosted desert, was dark, sterile. It even smelled like a new building—concrete sulfur, stone, and the chem salts meant to mask the Martian building materials. Not home. “It’s only been two weeks. I’ll get to it.”

“What are you reading?”

“Thank the Gods. How’d you get one so quickly?”

Cass leaned against the kitchen island. Beyond the great room’s picture windows stretched the rocky, misted plains outside the new Elysium Colony. In the distance, the trio of Albor Tholus, Elysium Mons, and Hecates Tholus dominated the dusty caramel horizon. Remote as this new station was, it was a damn great view. “The lab’s network guy found me a black market model.”

Sylvia hissed. “You made sure he wiped it, I hope. People do crazy shit with black market machines—brothels, grand theft, fight clubs…”

“I made sure. Besides, it’s a Luxe model, only one season old and in mint condition. I could only get a basic model paying retail. The hours I’m putting in at the lab, I need a nanny for the kids.”

Prior to “following her weird” into passionate affairs off-world, A.K. Shelley wrote fantasy under the pseudonym Angela Shelley. She’s worked as a technical writer, publications manager, graphic designer, biologist, and Buddhist nun. Born and raised under the starry skies of Canada, these days she lives with her husband and kids in Southern California. A.K.’s first book, Star Knight Errant: Thrust, is expected August 26, 2019 through The Wild Rose Press. http://akshelley.com