Today N.J. Walters, Entangled Publishing, and Rockstar Book Tours are revealing the cover and an excerpt from her Romantic Fantasy Book which releases on June 24, 2019! Check out the awesome cover and enter the giveaway!
On to the reveal! 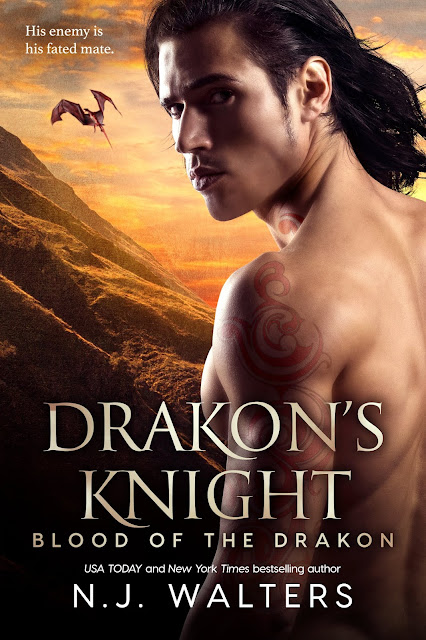 Title: DRAKON’S KNIGHT (Blood of the Drakon Book #7)
Author: N.J. Walters
Pub. Date: June 24, 2019
Publisher: Entangled Publishing LLC (Amara)
Formats: Paperback, eBook
Pages: 400
Find it: Goodreads, Amazon, B&N, iBooks, Kobo, Entangled Page
Drakon Jericho Drake, the child of a pure-blood dragon and human, has a simple plan: Kill the leader of the Knights of the Dragon and start a war. Except, when he meets his target, Karina Azarov, she can’t remember who she is. Worst of all––he can’t kill her. His dragon side has just claimed the dangerous woman as his mate.
Karina has no idea why these Drakon’s have taken her to their home. And she most certainly does not understand why she’s so drawn to her captor. Maybe because he’s strong, intelligent, and caring, in his enigmatic sort of way. One thing she knows, he’s not going to hurt her. If only she could remember something from her past that would explain why these Drakon’s hate her so much.
But if her memory returns, mated or not, he may get his war.. And one of them will die.
Read all the books in this amazing companion series!
DRAKON’S PROMISE
DRAKON’S PREY
DRAKON’S PLUNDER
DRAKON’S PAST
DRAKON UNCHAINED
DRAKON’S TEAR
Excerpt:
He caught her chin in his hand. Surprised by his action, she allowed him to lift her face until their gaze met.
“I had no plans to kidnap you.” His voice was so impossibly deep it seemed to vibrate in her very bones.
“No?” She reached up and wrapped her hand around his wrist. Or tried to. It was too thick for her fingers to reach all the way around.
“No.” He shook his head, making his hair flow around his shoulders. At some point, he’d lost the tie that had held it back. It was thick and lush, and she wanted to run her fingers through it, which was crazy, considering her circumstances.
The air practically cracked and snapped with tension until she wasn’t sure she could bear it for one more second.
“Well?” she demanded.
“I didn’t plan to take you.” He leaned inward until their noses were almost touching, his breath puffing against her skin. His nostrils flared. “No, I didn’t plan to take you,” he repeated as he rubbed this thumb over the curve of her jaw. “I’d planned to kill you.”
About NJ:
N.J. Walters is a New York Times and USA Today bestselling author who has always been a voracious reader, and now she spends her days writing novels of her own. Vampires, werewolves, dragons, time-travelers, seductive handymen, and next-door neighbors with smoldering good looks—all vie for her attention. It’s a tough life, but someone’s got to live it.
Sign up for NJ’s Newsletter!
Website | Blog |  Twitter | Facebook | Goodreads | Amazon Author Page | BookBub
Giveaway Details:
1 winner will receive a $5 Amazon Gift Card, International.
Giveaway ends May 13th, midnight EST.
a Rafflecopter giveaway