This post is part of a virtual book tour organized by Goddess Fish Promotions. A.M. Griffin will be awarding a $10 Amazon/BN GC to a randomly drawn winner via rafflecopter during the tour. Click on the tour banner to see the other stops on the tour. 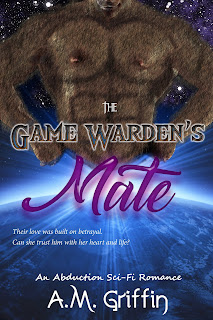 The Hunt. As the new Game Warden, Xrez Ym’ihla brings patrons from across the galaxy to track prey in a game built to enslave the weak and mate the strong. The business is a long running family legacy and Xrez is determined to succeed as his father had before him. He hadn’t meant to let one human occupy his thoughts, mind, and body.

His lies may come back to haunt him, but if he reveals the truth, he’ll ruin his chance to capture the heart of the one he wants.

The Prey. Esme Valdez had her entire life planned from an early age. As a chemist, her life was average and mundane, just the way she liked it. Until the impossible happened. Never did she imagine being abducted by aliens and forced to participate in a survival of the fittest game called The Hunt. If she survives and makes it to the end, she’ll be freed. If not, she’ll be forced to mate the one who captures her.

Esme is determined to win at all costs, even if it means putting her trust in a sexy alien who taunts her in the most delectable way.

Their love was built on betrayal. Can she trust him with her heart and life?

Xrez watched the hologram and vividly remembered how prey reacted during the introductory phase. It didn’t matter the species, at some point, they would go into survival mode and divide into the groups they thought would give them the best chance.

“One of them has a beast,” Xrez noted.

It was small, oddly shaped and quadrupedal. It kept close to the pale female, protectively. Its fur wasn’t much different than his hair, short, but where the beast’s fur appeared smooth, Xrez and other Dar’E had wiry, coarse hair.

“Oh, yes! This should prove interesting. We’ve never had one of those in The Hunt before. The human called it a dog. The universal translator has input it as a companion, animal, protector.”

When the female got up to walk across the camp, the dog followed dutifully by her side. Xrez thought the description fit. As time went on the translator would input other information about the dog.

The female and her beast walked past another female. She appeared smaller than the first. She had skin as dark as the coarse hair covering his body. But his coloring was dull compared to the radiance of her. Her skin was vibrant under the sun, glowing with energy.

He’d only seen humans on holograms, none in the flesh. He’d always thought they appeared soft and mushy. Those weren’t attributes he wanted in a companion or mate. Instead of turning him off, this one made his belly stir.

Xrez reached out. His hand hovered over the hologram. Of course, he couldn’t feel anything, but that didn’t stop his longing. How would his fingers and claws feel against her skin? Would he scratch her?

He balled his fingers and brought back his hand. She was too soft for him to touch. Her skin was much too thin to withstand his claws. He would never be able to grip her butt or scrape his claws down her back while she rode him.

She lifted her hair off her neck and used her other hand to fan her back. Her hair was dark, almost black, but under the sun’s light, he saw shimmers of gold. It appeared soft and wavy, thick and long.

He decided then that he would run his fingers through it.

A. M. Griffin is a wife who rarely cooks, mother of three, dog owner (and sometimes dog owned), a daughter, sister, aunt and friend. She’s a hard worker whose two favorite outlets are reading and writing. She enjoys reading everything from mystery novels to historical romances and of course fantasy romance. She is a believer in the unbelievable, open to all possibilities from mermaids in our oceans and seas, angels in the skies and intelligent life forms in distant galaxies.

Where you can find me:

A.M. Griffin will be awarding a $10 Amazon/BN GC to a randomly drawn winner via rafflecopter during the tour. You can enter by following this link:

5 Reply to “Book Tour: Game Warden’s Mate by AM Griffin”