This post is part of a virtual book tour organized by Goddess Fish Promotions. Megan Slayer will be awarding a prize pack featuring a necklace made by the author and signed swag to a randomly drawn winner via rafflecopter during the tour. Click on the tour banner to see the other stops on the tour. 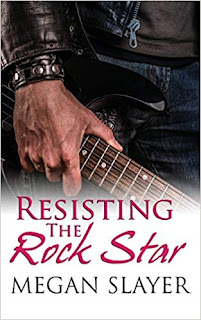 What the rock god wants, he gets—including her.

Mason ‘Kross’ Khan left the rock and roll stage to connect with the son he never knew existed. He’s used to electrifying crowds and romancing the ladies. Money’s never been an object. He’s not looking for a relationship, but when he meets the saucy brunette at a club, he’s smitten. Danya’s perfect—curvy, smart and has no idea he’s a giant in the music industry. The one-night stand is just what he needs and he’s convinced he’ll never see Danya again—until he attends conference night at the local high school.

Danya Littrell isn’t just his one-night stand. She’s also his son’s art teacher and the woman who sparks his muse. Can he balance parenthood, a relationship with Danya and his music career? Or will his secrets be too much for the relationship to withstand?

“You seem fine to me.” He held her close once again. “You seem pretty great.”

She tipped her head to the side to look at him. His eyes flashed, then he captured her mouth in a kiss. Electricity shot from her head to her toes. She pressed against him. She’d never been kissed so deeply. Sparks centered in her pussy. He threaded his fingers into her hair and held her tight without crushing her. When he broke the connection, her knees quaked. She sagged into him.

She wanted to say something snappy, but the words weren’t there. Instead, she settled for honesty. “For me, too.”

She draped her arms around his neck. She didn’t want to leave the dance floor or for the night to end. She could almost hear Kelly encouraging her to leave with him and live a little. He hadn’t asked her to go home with him, but the better part of her wanted that to happen.

“I can’t offer you forever, but I want to give you tonight,” he said. He kissed her again then cupped her jaw in both hands. “Very much so.”

“Who needs forever when one night can be everything?”

When she’s not writing, Megan spends time with her husband and son as well as three dogs and three cats. She enjoys art, music and racing, but football is her sport of choice. Find out more about Megan and Wendi at: http://wendizwaduk.com/indexMegan.htm Sign up for the newsletter here: http://ymlp.com/xgjmjumygmgj

Be sure to enter for your chance to win a prize pack featuring a necklace made by the author and signed swag to a randomly drawn winner.

One Reply to “Book Tour: Resisting the Rock Star by Megan Slayer”