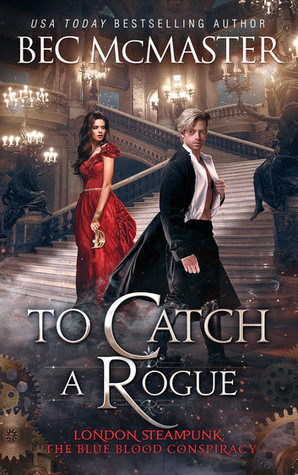 An impossible heist. A thief and a rogue. But will she steal his heart, instead?

The Company of Rogues finally knows the identity of the mastermind behind a plot against the queen—but their enemy is still one step ahead of them. When he kidnaps one of theirs, the Rogues plan a daring rescue mission that will lead them into the heart of the bloodthirsty Crimson Court.

It’s a job for a master thief, and there’s nothing Charlie Todd likes more than a challenge. To pull off the impossible, Charlie needs a crew, including the only thief who’s ever been able to outfox him.

He broke her heart. But now she must risk it all to save his life…

Lark’s spent years trying to forget her past, but the one thing she can’t ignore is the way a single smile from Charlie still sets her heart on fire. When he proposes they work together again, it feels just like old times, but she has one rule: this is strictly business.

It’s Charlie’s last chance to prove he can be trusted with her heart. But Lark’s keeping a deadly secret. And as passions are stirred and the stakes mount, it might be the kind of secret that could destroy them all…

Ocean’s 11 meets Dracula, in this sexy paranormal heist by USA Today Bestselling Author, Bec McMaster. If you like sexy paranormal romances, steampunk shenanigans, and plenty of action-adventure (vampires, dirigible flights, and steamy rooftop chases), then dive into this thrilling heist with harlie and Lark.

Hi! And thank you for having me!

My name is Bec McMaster and I write fantasy-fuelled romance from the comfort of my home in Australia. I’m the author of the award-winning London Steampunk series, and its spin-off, London Steampunk: The Blue Blood Conspiracy.

The Blue Blood Conspiracy Series is set in an alternative steampunk-style Victorian-era world: To combat a mysterious threat against the crown, the Duke of Malloryn puts together a highly-skilled team of individuals who call themselves the Company of Rogues. Along the way they fall in love, create mayhem, and discover who’s at the heart of the plot against them.

What drew you to steampunk romance?

Steampunk stories are often set in an alternative history where steam power is the predominant technology, along with all the societal impacts that has. Think weird science, dazzling gadgets, corsets, sky pirates on dirigibles, clockwork automatons that patrol the streets…. It’s pure unabashed adventure. It’s fun. And there are very few limits of what you can do.

I tend to think of my books as a little more “gaslit fantasy” rather than straight steampunk. They’ve got the steampunk flavor, but the world is a little darker, a little more paranormal in style. The Blue Blood Conspiracy series is like if Penny Dreadful (TV show) and the Sherlock Holmes movies featuring Robert Downey Jnr. had a baby (or a happy ever after).

So what drew me to this mash-up of genres? I was an avid fantasy (and sometimes sci-fi) reader in my teens, before discovering historical romance when I was sixteen. So for me, steampunk romance is a means to meld everything I love into one weird fusion.

My world is one part vampiric-style aristocracy—think the British ton, if they drank blood, instead of tea; one part a company of spies trying to uncover a massive conspiracy against the Queen, with all the requisite steampunk-style gadgets; and one part witty repartee, stolen kisses and steamy good times between two hard-headed characters.

What was the inspiration for “To Catch a Rogue”?

To Catch A Rogue is the fourth book in the series, in which the Company of Rogues faces its biggest challenge when the mastermind behind the conspiracy captures one of their own. The only way to rescue him is to infiltrate the bloodthirsty Crimson Court in Russia, and pull off a heist-style rescue right in front of the enemy.

Enter Charlie Todd, resident thief and expert in all things of a slightly dubious nature. He knows that if the Company of Rogues are going to pull this off, he’s going to need the best, which includes Lark, his one-time friend, and the only thief who’s ever been able to outwit him.

But Lark’s keeping a deadly secret and as the stakes rise, it might be the kind of secret that can destroy the Company of Rogues.

To Catch A Rogue was loosely inspired by all those great classic movies like To Catch A Thief and Ocean’s 11 with a sexy paranormal twist.

Choosing Lark would venture too far into spoiler territory, as she’s got a very mysterious past, so I’m going to go with Charlie.

Charlie’s been a secondary character throughout the original London Steampunk series (he’s the younger brother of the heroine of Kiss of Steel), so I couldn’t wait to finally tackle his story. I found him really interesting to write, as a lot of my male heroes are dark, dangerous alpha-style leads, but Charlie’s the complete opposite. He’s smart, charming, got a little bit of cocky swagger… But he’s also 100% loyal to his friends, lethal if he’s protecting them, and completely smitten by the girl who stole his heart. The Company of Rogues jokingly refer to him as their ‘sugarplum’, which he hates, but he’s definitely the kindest of the group.

Also, voted most likely to attempt a practical joke on the other guys and probably smart enough to pull it off.

There’s one more book in the Blue Blood Conspiracy spin-off—Dukes Are Forever—and it features the Duke of Malloryn. He’s the one who created the Company of Rogues, and he’s this deliciously Machiavellian character who was trapped into marriage by Miss Adele Hamilton several books ago (who has her reasons).

Throughout the series, he’s been trying to discover the mastermind behind the conspiracy, and in Dukes Are Forever, he finally faces his enemy—only to realize this plot is more personal than he ever suspected.

When he finds evidence that suggests his wife might be an enemy agent, he’s determined to seduce her to discover the truth. Shenanigans ensue.

BEC MCMASTER grew up on a steady diet of 80’s fantasy movies like Ladyhawke, Labyrinth and The Princess Bride, and loves creating epic, fantasy-based worlds with heroes and heroines who must defeat all the odds to have their HEA. If you like sexy, dark, paranormal romance, try her Dark Arts series; for some kick-bustle ladies-saving-the-day steampunk romance then check out London Steampunk; and for rocket-fuelled post-apocalyptic romance with a twist on the werewolf theme, then see her Burned Lands series.

Bec has been nominated for RT Reviews Best Steampunk Romance for Heart of Iron (2013), won RT Reviews Best Steampunk Romance with Of Silk And Steam (2015), and Forged By Desire was nominated for an RWA RITA award in 2015. The series has received starred reviews from Booklist, Publishers Weekly, and Library Journal, with Heart of Iron named one of their Best Romances of 2013.

Join Bec’s newsletter for all the latest news on releases, exclusive excerpts and cover reveals, and get your copy of ‘Tarnished Knight’, a novella in her award-winning London Steampunk series. Copy and paste this link into your browser: http://eepurl.com/F_LkD.

One Reply to “Book Tour: To Catch a Rogue by Bec McMaster”