This post is part of a virtual book tour organized by Goddess Fish Promotions. Megan Slayer will be awarding a prize pack featuring a necklace made by the author and a signed swag pack to a randomly drawn winner via rafflecopter during the tour. Click on the tour banner to see the other stops on the tour. 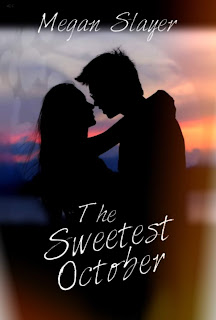 Love and Halloween are an odd couple, but they can be the best means to heal a broken heart.

Allison Prince never planned on leaving her job with the Waite Gazette, but when the chance to discover her past comes along, she can’t say no. She’s determined to learn about her grandmother and make the advice in her column more relatable. With her rescue dog, Woofy, beside her, she sets out to learn as much as she can about Hallowsville, Ohio.

Erik Greene doesn’t believe in love and isn’t fond of Halloween. He’s convinced his broken heart won’t heal—until he meets Allison and visits the local animal shelter. He doesn’t want a journalist snooping around Hallowsville. But Allison isn’t all she seems and the pup at the shelter proves love is possible.

Can he open his heart to new opportunities and chase the love of his life? Or is he destined to be the Dandy Devil of Hallowsville all alone?

Margaret returned. She slid the tray of unbaked cookies into the hot oven. “I noticed we have a new addition to town.” She stood. “Seems like a nice girl.” She offered up a cardboard box. “Here’s the other coil.”

“Thanks.” He opened the flaps. “Margaret, please don’t try to fix me up with Allison or Ella Mae or anyone else.”

“Who said I did that?” Margaret set the timer. “Did she say something? That girl. I asked her to help me today. I’m behind, not trying to find you a date.”

“Then I’m sorry.” He bolted the new coil into place. He didn’t understand why the people of Hallowsville wanted him to move on. The break-up with Tracey just about broke him. He didn’t want another girlfriend. Yes, Allison was pretty and if she hadn’t been a reporter, he might have asked her out for one night. But Allison had the power to embarrass Hallowsville if she desired and to make her name with the article. Maybe he was in the wrong, but he didn’t want to see his town shamed by an investigative reporter.

“Almost done?” Margaret asked. “I could use the extra space to do double batches and catch up.”

“Yeah.” He finished the last connection, then backed out of the cavernous space. “Try it. If we have heat, you’re in business.”

“Awesome.” She twisted the knob and the coil glowed. “Works. Yes.” She threw her arms around him. “Thank you.”

“It’s all in a day’s work.” He brushed the flour off his knees and stood. “Get those cookies done, but I expect a freebie when I come through during the parade.”

“One?” She laughed. “How about a dozen? You can take a few to the new girl and make a better impression.” She paused. “Yes, Delilah said you were a tad brusque.”

“I might have been.” He shrugged. “She threw me off my game.”

“I know.” She elbowed him. “Have you been down to the animal shelter lately?”

“My sister says there’s a new dog there that might be up your alley. Shy little thing. Sweet-natured,” Margaret said. “I know you want a guard dog, but this one is so adorable.”

“A small dog?” He hadn’t put much thought into adopting a dog. He had his work at the welcome center. Would a dog fit in? Wreck the place? Was he ready for a companion? Would having a dog impress Allison? He paused. What was he thinking? He didn’t have to impress her and shouldn’t be considering such.

“Just go down there. Check out the dogs. One will speak to you.” She rubbed his shoulder. “Promise, but you have to go. Please?”

“Will do.” He grabbed his tools and headed out of the bakery. Take Allison cookies? No way. He refused to get close to a reporter—no matter how much he might like her. Not a chance. Go to the shelter? Why not? What could go wrong?

When she’s not writing, Megan spends time with her husband and son as well as three dogs and three cats. She enjoys art, music and racing, but football is her sport of choice. Find out more about Megan and Wendi at: http://wendizwaduk.com/indexMegan.htm. Sign up for the newsletter here: http://ymlp.com/xgjmjumygmgj

2 Reply to “Book Tour: The Sweetest October by Megan Slayer”