This post is part of a virtual book tour organized by Goddess Fish Promotions. The author will be awarding a $10 Amazon or B/N GC to a randomly drawn winner via rafflecopter during the tour. Click on the tour banner to see the other stops on the tour. 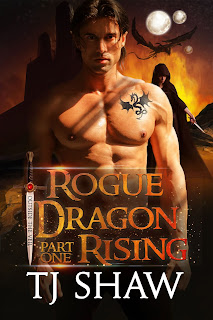 Twenty-three year old, Amari Hawke, is thrust into the world of two-soul shifters when she is injured and kidnapped by trackers outside the veil, beyond the safety of her homeland. Unable to remember her past, she trusts no one and relies on instinct to survive. As her awakening approaches, the first time she will transition into her animal, she must evade rogue shifters trying to capture her.

Now free from the King’s Army, powerful dragon lord, Jaxon Blackthorn, seeks a peaceful life. Intent on building his lands into a viable plantation, away from war and bloodshed, he is reluctantly pulled back into the fight when he defends the mysterious shifter with no past against an unseen enemy.

As evil threatens to destroy the entire realm, can the battle-hardened warrior and coming-of-age noblewoman accept their differences to forge an alliance that will ultimately unite the shifter nations?

Grab your copy for only $0.99 during the book tour

Giving his curious dragon some freedom, Jaxon stepped close and breathed in Amari’s scent. Cinnamon spice drifted through his nostrils and settled in his brain. She didn’t smell like an herbivore.

“Are you toying with this dragon?” he murmured in her ear.

She did not like him so near, her self-preservation instinct urging her to move away. Although pressed against a wagon wheel, she could have sidestepped out of his reach. But instead, she squared her shoulders and held her ground. Her entire body quaked, yet she stood before him with her chin thrust forward in defiance. Not normal behavior for a sheep.

Kip snickered at his back. “You’re losing your teeth, Jax.”

“Especially when a sheep challenges the great Jaxon Blackthorn, instead of cowering at his feet,” Crispin added.

Jaxon leaned closer, his mouth a hairsbreadth from the delicious curve of her neck. “Is that what you are? A sheep?”

TJ Shaw is a multi award-winning author who writes from her heart by incorporating her dreams and experiences to create strong, passionate characters who must overcome personal flaws to survive against the challenges of traversing through magical realms, undiscovered planets, and apocalyptic catastrophes.

The author will be awarding a $10 Amazon or B/N GC to a randomly drawn winner via rafflecopter during the tour. To be included in the drawing follow this link: