Caden Raferty messed up—big time. He’s turned his back on his family and friends, but most of all his mate, Danielle Blueriver.

Danielle is done with love and done with Caden. After two near death experiences, she’s regressed into herself, not wanting to be seen or heard. Her life is crumbling down around her and the only thing giving her the will to live are her boys, Aiden and Nicolas.

But, an old foe isn’t done with either of them, and once again, they are thrust together in a situation neither can get out of.

Can Danielle and Caden find their path to happiness this time, or will the sins of their past destroy their future?

“Sounds like he could use some food in his belly.” Mrs. Martin appeared behind the counter while Aiden toddled over to her with his box of cookies in his hands. “This should help you out for a couple of weeks. Remember, if you need anything, the pack is here for you. We’re all here for you.”

“Thank you.” Danielle grabbed for the cold bag and Mrs. Martin stayed her hand. “Is something wrong?”

“You can’t keep sliding into the shadows. You’re not a whisper on the wind. You’re not even a willow. You’re a reed. Hollow. You go through the day pasting a smile on your face. Laugh when appropriate. Saying thank you. Please. You’re welcome.” Mrs. Martin leaned toward her. “I see your pain. I feel it. It’s electric. A current in the water so strong it takes a person’s breath away. You’re not fooling anyone.”

“Uh…” Danielle didn’t know what to say. “Thanks.” She smiled at Aiden. “Tell Mrs. Martin thank you.”

“You’re very welcome, my boy.” Mrs. Martin waved at him. “Danielle, remember what I said.”

Danielle gave a curt nod. “See you in a couple of weeks.”

She couldn’t get out of there quick enough. The air surrounding her became oppressive as Nicolas began to cry harder. She realized it was because the black mass of negative emotions seeped through the wall like an oily sludge. The quicker she tried to re-enforce the construct, the more holes appeared. She needed to get home. She couldn’t fall apart out in public. She couldn’t let anyone see how much Caden’s betrayal hurt her.

“Mama?” Aiden blinked at her as she lifted him into his car seat. “Ou ‘kay?”

She swallowed hard and took a second, afraid he’d hear grief in her voice. “I’m fine, big boy. How about a cookie and some milk when we get home?”

“Yes, he is. Silly Mama. Forgot his bottle.” She made a show of frowning at him then rolling her eyes. Each practiced movement meant to keep Aiden from seeing the frayed ends of her emotional state.

Icy fingers of dread slid down her spine. At one time, the sound of his voice brought her so much pleasure. Just a whisper of it filled her with anticipation. Those nights she spent curled in his embrace talking about their future and the idea of falling in love with him had been so effortless. She’d instantly felt the connection to him the day they arrived in Window Rock. The cocky smirk on his face. The way his blue eyes twinkled with a hint of sensual heat and the feel of his hand curling around hers when he said, “Pleasure…” It was like he said, “I’ve spent my whole life waiting for this moment. Welcome home.”

“No, I’ve got it.” Danielle took the opportunity to push a strand of her hair behind her ear to cover the track of tears sliding down her left cheek. “No need to interrupt your day to help me.” 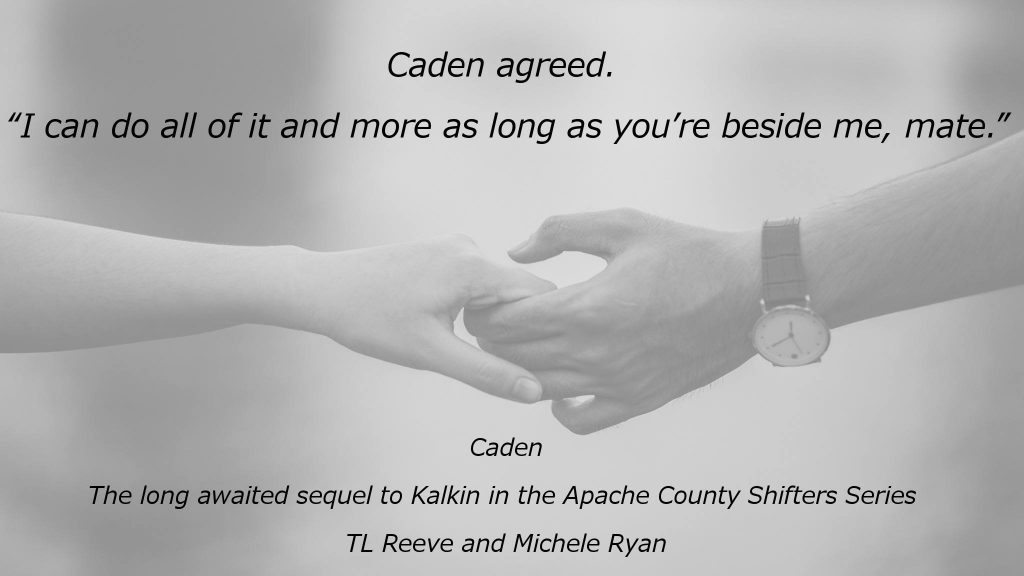 TL Reeve: TL Reeve, a best-selling, multi-published author, was born out of a love of family and a bond that became unbreakable. Living in Alabama, TL misses Los Angeles, and will one day return to the beaches of Southern California. When not writing something hot and sexy, TL can be found curled up with a good book, or working on homework with a cute little pixie.

Michele Ryan: Michele Ryan is an author with Decadent and After Glows Publishing. She embraced her creative passion and co-authored several books with fellow author TL Reeve. Michele has also published two solo novellas. Michele is a lifelong resident of the state of New Jersey, along with her husband and three children, whom she refers to as her hobbits. When Michele is not plotting or writing, she can be found either volunteering at her children’s school or reading.