This post is part of a virtual book tour organized by Goddess Fish Promotions. Megan will be awarding a bracelet made by the author and a swag pack to a randomly drawn winner via rafflecopter during the tour. Click on the tour banner to see the other stops on the tour. 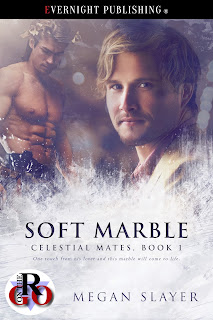 One touch from his lover and this marble will come to life.

Kratos, God of power and strength, has been imprisoned in pure white marble for more than two centuries. His lover can break the spell—if only his lover would find him.

Andy Green knows his ancient artifacts. He spends his days restoring works of art. When the sculpture of Kratos enters his studio, he can’t hide his attraction. Will he be able to free the god or will forces beyond his control destroy everything he’s earned?

“Do you have some … clothing?” Kratos waved his hand in front of Andy. “Something like you have?”

“I’ve got a change of clothes in my car. I don’t know if they’ll fit you, but anything is better than running around nude.”

“Nude can be freeing.” If he had his way, he’d strip the odd clothing from Andy’s body and learn every bit of him.

“Freeing, but it can get you arrested. Public nudity is against the law on campus.” Andy grinned. “Give me a minute or two. My car’s in the back lot.”

“Interesting.” He had so much to learn. He’d been able to observe some things, but not enough to venture out on his own. Andy would be invaluable, and not just as a guide.

Andy picked up keys. “Stay here. I’ll be right back.” He hurried out of the room, leaving Kratos to his thoughts.

Kratos glanced around the room. The human race evolved so well. Tall windows opened the view to the other rooms in the building. A couple of other statues waited in the room. They weren’t the vessels for imprisoned deities. He touched the face of the female statue. He remembered seeing the work back in Athens. Praxiteles carved Aphrodite well and captured the very essence of her faint smile. He’d been vanguard to sculpt her without clothing. Then again, Aphrodite preferred to spend her time in the nude—usually with one of her many suitors.

He sighed and folded his arms. He missed the other gods and goddesses. What he didn’t miss was the water and the ship. The man who’d rescued him from the depths of the sea didn’t please him and couldn’t free him from the marble. He shuddered at the memory of the man’s hands on his body. Rough touches, fondling his ass while the man grunted and rubbed his own dick on Kratos’s thigh. His stomach churned. Was the rescuer the man who sent him? Couldn’t be. That man had to be dead by now. Then who was his owner? He wanted to think about better things—like Andy. He closed his eyes. A vision of Andy’s bright-blue eyes formed in Kratos’s mind. He could listen to Andy’s voice and moan into his touch.

When she’s not writing, Megan spends time with her husband and son as well as three dogs and three cats. She enjoys art, music and racing, but football is her sport of choice.

Megan will be awarding a bracelet made by the author and a swag pack to a randomly drawn winner via rafflecopter during the tour. To be included in the drawing follow this link: a Rafflecopter giveaway