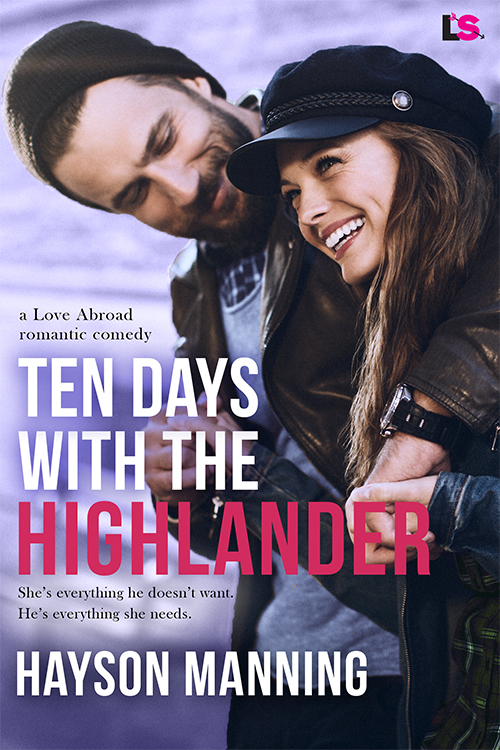 Go-getter Georgia Paxton has ten days to acquire a quaint hotel in the Scottish Highlands for her travel accommodation company before she’s off on her next grand adventure. Too bad the sexy, broody Scot who owns the place is dead against the idea…and that she’s in very real danger of losing their little bet to see who can convince whom first.

There’s no way Callum MacGregor is going to let the gorgeous American turn his tiny hometown over to bored tourists looking to satisfy their Outlander fantasies. He only has ten days to convince her to slow down and see the magic of the town and its people. If he succeeds, he won’t have to run her out of the county. But if he fails, Georgia might run off with his heart.

Callum twisted the arm until it was free, then clicked it into place. He then put her hand on a knob on the side of the machine. “Twist lightly,” he said. “That knob is temperamental. Your stroke has to be just right.”

With his hand covering Georgia’s, he turned the knob until a stream of coffee poured into the ceramic cup.

He pressed in another half inch and grabbed her right hand, guiding it to a lever. “To get the pressure right, you’ve got to push this lever down until the steam starts to appear.” Her hand was soft and warm under his.

“Okay.” More husky voice, and heat pouring out of her and soaking him.

“When you get steam, turn it off like this.” He gently pushed her hand, so the lever set to neutral. “You want to get all the water out before you dip your wand.”

She moved back a fraction, brushing against his chest. “Everyone should know how to dip their wand just the way they like it.”

“Manufacturer recommendation.” He edged back, so the evidence of this conversation didn’t announce itself. He could blame morning biology, but he wasn’t a liar by nature.

The atmosphere in the room thickened to clotted cream.

“I always follow the manufacturer’s recommendation. I wouldn’t want the wand to get damaged.”

He shook his head. “Terrible thing, a damaged wand.”

With the wand dipped into the silver jug, he swirled the milk until the right consistency of froth appeared. Balancing the cup and the jug, he drew a heart into the coffee.

“You must always clean the wand, thoroughly. No one wants a dirty wand.”

“Wands should be kept clean at all times. Never know when you’re going to need it.” The husk in her voice vibrated through his body.

He stepped back, hands in his pockets, her heat hitching his heart rate.

I love Princess Bride, Young and the Restless, Days of our Lives – the drama is deliciously addictive. Big Bang Theory but will take Wolowitz over Cooper. Star Trek not Star Wars. Undercover Boss, Secret Millionaire – any story that shows the little guy making it. I follow the Buffalo Bills like a religion. I am spellbound by showjumping and equestrian eventing. I love curling up and reading all books – no genre is off-topic. I like ironing, I hate peas, love donkeys, I play a killer game of Scrabble. I will often be heading towards the fridge for another Diet Coke. I eat nothing with legs and believe wine goes with everything, oh and I’m an expert at finding new and inventive ways to avoid exercise.I live in the sparkly beachside suburb of Redondo Beach in California with my infuriating shoe-dropping husband and my two boys who speak in mystifying grunts.

$25 Amazon Gift Card will be awarded to one randomly drawn winner. To be included in the drawing follow this link to Rafflecopter: