A captivating story of feuding nobles forced to marry…
and destined to fall in love. 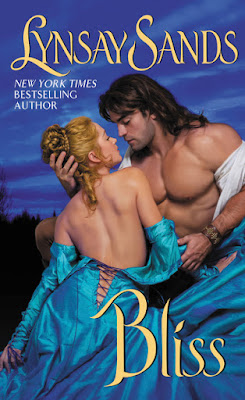 No one blends humor and sensuality like New York Times bestselling author Lynsay Sands in this captivating story of feuding nobles forced to marry…and destined to fall in love.
Love thy neighbor, ’tis said. A fine idea, except when the neighbor in question is Lord Holden. Lady Helen Tiernay has complained frequently about his treatment of his people. Too frequently perhaps, for the king intends to curb their constant bickering by ordering them to wed. Helen can’t refuse a royal decree, but she’ll do everything possible to drive away her devilishly attractive husband-to-be.

Holden has faced all manner of horrors on the battlefield. But marriage to “the tyrant of Tiernay” is still a worrying prospect—until he glimpses Helen in the flesh. What flesh it is…soft, lush, made for his touch. If she weren’t so intent on thinking up devious ways to prevent consummating their bond, Helen would see how perfect they are together, and that a marriage begun as enemies can turn to absolute pleasure.

“Lady Tiernay,” Templetun greeted, jogging up the last few steps to come abreast of Hethe as he passed before their two hostesses. “May I introduce Lord Hethe of Holden. Lord Holden, this is Lady Helen of Tiernay and her aunt Lady Nell Shambleau.”

Hethe moved up another step so that his face and Helen’s were on a level, and managed a smile as he gazed into his fiance’s sky blue eyes that matched her gown. Actually, his mouth was responding to his nether regions, and it fashioned itself into a beaming grin of pleasure for the woman—until she smile back and said, “How do you do?”

His smile died an abrupt death, becoming a dismayed grimace. It wasn’t the woman’s words that affected him so but her foul breath that blew at him as she spoke. The shock of it made Hethe take a hasty step backward. He would have tumbled down the stairs had William not steadied him with a fist at his back.

“God’s teeth!” he gasped in horror, bringing a perplexed and even slightly offended look to their hostess’s face. It also brought him a rather sharp and confused look from Templetun, reminding him of his manners. Forcing a false smile of apology to his lips, Hethe turned his face slightly to avoid the noxious fumes and excused himself by muttering, “Nearly lost my footing.”

“Oh, well, you must be careful, my lord,” his betrothed breathed at him sweetly. Leaning closer, she snatched his arm through her own, presumably to save him from losing his balance again. She then smiled brightly and sighed gustily into his face. “Such a handsome man. We would not wish you to tumble down the stairs and break your neck! At least, not before the wedding, hmmm?” she teased, her eyes sparkling.

Hethe nearly whimpered. His head was swimming under the onslaught of her poisonous exhalations. Sweet Saint Simon! He had never smelled anything quite so raw or putrid. He hadn’t thought it possible for such a scent to come out of a human’s mouth. And the fact that it was coming from the sweet bow-shaped lips of the lovely woman before him just seemed to make the horror of it that much worse.

“Shall we go inside?” the woman’s aunt suggested cheerfully.

“Aye,” Lady Tiernay agreed. “I am sure you gentlemen are ready for a nice mug of ale after your journey.” She spoke the words to Hethe, her breath wafting over his face like an ill wind carrying the stench of death. Feeling his stomach roil, Hethe nodded faintly, more than eager for any excuse to move and avoid the situation he was in.

Lord love me, I have to marry this wench, he thought as he hurried rudely up the last step and into the keep, dragging her a step behind. She would be breathing this putrescence at him for the next fifty years or so, he thought faintly, too dismayed to even realize how rude he was being by pulling Lady Tiernay about and leaving her aunt and the others to follow.

Lynsay Sands is the nationally bestselling author of the Argeneau/Rogue Hunter vampire series, as well as numerous historicals and anthologies. She’s been writing stories since grade school and considers herself incredibly lucky to be able to make a career out of it. Her hope is that readers can get away from their everyday stress through her stories, and if there’s occasional uncontrollable fits of laughter, that’s just a big bonus. Please visit her on the web.

One Reply to “Book Tour: Bliss by Lynsay Sands”