Some secrets aren’t meant to be kept… 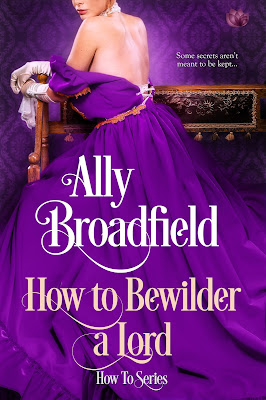 HOW TO BEWILDER A LORD
How To #3
Ally Broadfield
Releasing June 5th, 2017
Entangled Scandalous

Gavin Corey, the Earl of Thornbrook, has shed his rakish ways in the hope of winning Lady Louisa’s heart, but neither she nor her parents consider him a suitable match. He convinces her to join forces with him to locate a missing family treasure by proposing a wager: if he finds the jewels, Lady Louisa must allow him to court her, but if she prevails, he must reveal the secret he’s keeping from her.

Lady Louisa Adair might be the most sought after lady on the marriage mart, but she values her independence above all else and has no interest in giving up her inheritance to marry. As she spends more time with the charming earl, however, she comes to wonder if he’s worth risking her inheritance and her family’s disapproval… until she’s confronted with the scandal from his past.

She paused and flipped back a few pages. “So it looks like she stopped journaling when she began her…ahem…relationship with Bukov.”

“Of course she did. She had a vastly superior form of entertainment to indulge in.”

“For heaven’s sake, do be quiet.” Her eyes flashed back and forth across the page.

“For the sake of my sanity, could you please read aloud.”

Without looking up, she waved a hand at him. “I’ll let you know as soon as I find something interesting.

“Of course. I’ll just sit here and twiddle my thumbs until you deem it appropriate to include me.”

He leaned closer, but her arm blocked his view of the page in question.

“‘Begin where warmth abounds. Very close, yet worlds away, it is no place for the meek.’”

“Right. That was the clue that we all assumed pointed to the portrait over the fireplace. Is there any reason to think otherwise?”

Louisa shook her head. “Not that I can think of.”

Gavin tossed the words around in his head. “I’ve never understood what she meant by ‘…it is no place for the meek.’”

“I agree, but I don’t think it matters. This was the clue that led to the painting that had the grille hidden beneath the backing.”

Something was tickling his memory, but he couldn’t figure it out. “Is there a pen and paper somewhere? I’d like to write down the clues so we have them all in one place.”

She pointed to the other side of the room. “Check the drawers in the desk over there.”

He found what he needed and pulled off his gloves before carefully writing the entire clue. In the meantime, Louisa had continued reading without him. Oddly enough, her face was flushed a deep red. “Have you discovered another clue?”

“Not exactly.” She sucked in a deep breath. “A few days later, she wrote, ‘What new surprises will my lover have for me tonight?’” She flipped the page. “‘I long for the sweet torture of his touch, for the pleasure he brings me.’”

It suddenly seemed very warm in the room.

“‘My pulse races as I remember the warm touch of his hands. I throb with unmet desire, craving his practiced attention.’”

“Um, perhaps we should stop here for the night.”

Preferably before he spontaneously combusted.

Her eyes wide like a frightened animal, she nodded her agreement and put the journal back on the shelf, then came toward him and stopped a few feet away.

Without thinking, he lifted his hand and cupped her cheek. For a moment, she leaned toward him, and he leaned a bit nearer to her. They were so close he could feel her warm breath against his neck. Just when he decided it would be a good time to kiss her, she took a step back.

He reached for her hand, but she backed away from him. “Louisa,” he said ever so softly, reaching for her again.

She shook her head, then turned and ran from the room, her dog trailing behind her.

His throat tightened. That had not gone well. Certainly not the way things had progressed in a thousand or so of his dreams that had featured her. He wanted to chase her down the corridor, but that would probably scare her away forever. Though he was certain she was as innocent as the day she was born, he might still have a chance with her if she desired him even a fraction of the amount he did her.

Don’t miss any of the HOW TO romances! 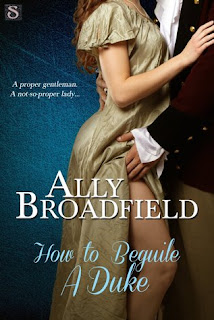 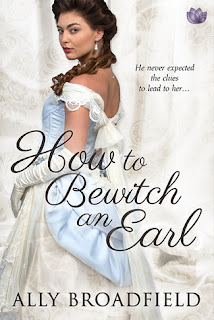 Ally Broadfield has worked as a horse trainer, director of marketing and development, freelance proofreader, and a children’s librarian, among other things. None of them were as awesome as writing romance novels (though the librarian gig came closest). She lives in Texas and is convinced her house is shrinking, possibly because she shares it with three kids, four dogs, a cat, a rabbit, and assorted reptiles. Oh, and her husband.
Ally likes to curse in Russian because very few people know what she’s saying, and spends most of what would be her spare time letting dogs in and out of the house and shuttling kids around. She has many stories in her head looking for an opportunity to escape onto paper. She writes historical romance set in Regency England and Imperial Russia.

One Reply to “Book Tour: How to Bewilder a Lord by Ally Broadfield”