An NFL player who finds love when he least expects it… 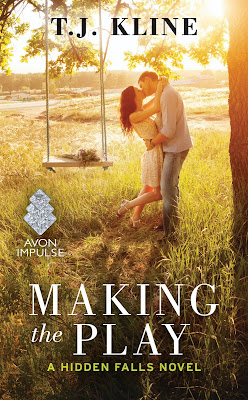 T.J. Kline launches a brand new series with the charming story of an NFL player who finds love when he least expects it…
Grant McQuaid has dedicated his entire life to his football career. Now an injury threatens his place on the team and he’s forced to return home to rehabilitate. But when he meets his “biggest fan,” a precocious, blue-eyed, hearing impaired boy named James—and his beautiful mother, Bethany—Grant begins to question whether football is the future he still wants.
Bethany Mills has been doing just fine since her husband walked out on them… and she definitely doesn’t need another man to disappoint her—or her son. But when James runs into his hero at the park, Bethany admits there is a void in her son’s life that she just can’t fill. Her attraction to the handsome football star is undeniable, but a man in the limelight is the last thing she wants for herself, or James.
Grant doesn’t want to subject Bethany to the chaos of dating a professional athlete. But the more time he spends with her and James, the harder it is to resist making a play for her heart…
BUY NOW
Amazon | B & N | Google | iTunes | Kobo

“We should probably get going,” Jackson muttered to his brother, jerking his head toward the parking lot. “Gotta get a fence fixed. It was nice to meet you, Bethany. You too, James. Maybe next time we come out here, you can come play ball with us.”

James immediately looked up at his mother. “Can I?”

“We’ll see,” she answered, humoring him as Jackson left the three of them and headed toward the parking lot. The two men were just being polite and didn’t really mean it, but James was still too young to understand that.

“Yay!” James scrunched up his face, looking up, and a bright smile spread as he got an idea. “Then you could come to my house for dinner and call my Grandpa and tell him I played football with you.”

A blush covered Bethany’s cheeks. Her son didn’t realize he was practically setting her up on a date. “James, I don’t—”

Grant dropped his head back and laughed out loud. It was a warm, relaxed sound that reminded her of the afternoons she’d hung out in sweats, watching football with her Dad, or nights curled up with James, watching him sleep. Inviting, homey, comforting.

T. J. Kline was raised competing in rodeos and Rodeo Queen competitions since the age of 14 and has thorough knowledge of the sport as
well as the culture involved. She writes contemporary western romance for Avon Romance, including the Rodeo series and the Healing Harts series. She has published a nonfiction health book and two inspirational fiction titles under the name Tina Klinesmith. In her very limited spare time, T.J. can be found laughing hysterically with her husband, children, and their menagerie of pets in Northern California.
Website | Facebook| Twitter | GoodReads

One Reply to “New Release: Making The Play by T.J. Kline”