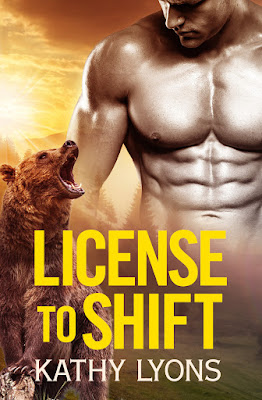 BEAR MEETS GIRL…
Julie Simon returns to Saginaw, Michigan, to find her ailing father’s missing research on local shapeshifter lore. Unlucky for her, the only person who can help her is the darkly sexy Mark Robertson, the guy who spent an entire summer giving her the cold shoulder-and one white-hot night of pleasure…
Mark is a hair’s breadth away from going feral. Soon, his grizzly side will destroy everything that makes him a man. And after years of fighting, Mark is ready to give in to the beast. Then Julie-the gorgeous, curvy book nerd who awakened his most primal desires as a young man-shows up at his door. Now, he’s fighting an insatiable longing to claim her as his mate. But Julie isn’t the only one after her father’s research. Someone-or something-evil is tracking Julie’s every move…

“Stop!” he snarled, and she froze.

Pulling out his cell phone, he flipped on the spotlight, aiming it in the corner nearest the stairs. There was a thin layer of debris there, but it had been disturbed. Possibly by a large boot.

“The dust has been disturbed.”

She frowned at him. “Seriously? That’s a dust bunny that hasn’t been cleaned in, like, a year.”

She gaped at him. “Did you get a degree in forensic science after high school? Criminology? Or have you just watched a little too much CSI?”

He ignored her, turning his phone so the spotlight ran over the entire floor. He couldn’t see a pattern. Maybe someone had been up here. Maybe he was just seeing things. “I trust my instincts.”

“Yeah, me, too. And mine say yours are crap.” She was teasing him. He could tell by the tilt of her head and the slight lilt in her voice when she spoke. He wanted to respond. Hell, he wanted to flirt and cajole and a zillion other things. But something overrode his mating instincts, and that was serious. So he didn’t respond to her overture, and eventually she huffed out a breath and headed back downstairs. He couldn’t blame her. He hadn’t given her any reason to think he was anything but nuts. But something nagged at him.

KATHY LYONS is the wild, adventurous half of USA TODAY bestselling author Jade Lee. A lover of all things fantastical, Kathy spent much of her childhood in Narnia, Middle Earth, Amber, and Earthsea, just to name a few. There is nothing she adores more than turning an ordinary day into something magical, which is what happens all the time in her books. Winner of several industry awards including the Prism-Best of the Best, Romantic Times Reviewer’s Choice, and Fresh Fiction’s Steamiest Read, Kathy has published over 50 romance novels, and she’s just getting started. Check out her latest news at KathyLyons.com.

One Reply to “New Release: License to Shift by Kathy Lyons”