Blood Is Thicker Than Ink. . . 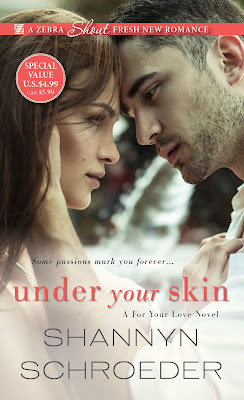 UNDER YOUR SKIN
For Your Love #1
Shannyn Schroeder
Releasing June 28th, 2016
Zebra Shout

Blood Is Thicker Than Ink. . .
Norah O’Malley has been alone for a long time. It’s been ten years since her father and four brothers shipped her
off to be raised by her aunt. Seven months since she’s seen the guy who got her pregnant–who still doesn’t know. And it’s two weeks since she came home to Chicago and discovered none of her family wants to talk–or listen.
She never expected to walk into a tattoo shop seven months pregnant and get her socks knocked off by instant
attraction. She can’t even see her socks. But Kai Ellis is big and gruff and sexy as hell, and if he has a past, well, so does she. Even more, Kai knows how to listen so that Norah feels just a little less alone . . .
All the chemistry in the world can’t help Norah make her decisions. And no sizzle of desire will make Kai believe in
happy endings. But a little time with someone who understands might just change everything . ..
BUY NOW
Amazon | B & N | Google| iTunes | Kobo

Jimmy walked up to her and held out a hand to help her up. Instead she flipped her thumb to the spot next to her. He sat, extending his legs out in front of him, the crease in his pants still visible after a day of work.

“I think talking out here would be better. Kevin’s inside doing laundry and I pissed him off again.”

“He’ll get over it.” Jimmy looked at her clothes.

She tugged at the maternity top. “Moira borrowed stuff from her sister-in-law. At least now I don’t feel like an overstuffed burrito.”

She wrinkled her nose. “Not happy, but better.”

“What do you want to talk about?”

Her hand automatically went to her belly again. She’d always thought it weird when pregnant women did that, but now she understood. You couldn’t really control it. “I’ve done a lot of thinking. And I called Avery—” She stopped with the realization that she let his name slip. But not even Jimmy was good enough to track him down with only a first name.

Another deep breath in and released. Jimmy had stiffened beside her. He was better at covering his anger than Kevin, or any of the O’Malley boys for that matter.

“I think I want to give the baby up for adoption.”

Jimmy ran a hand over his face and then stared out at the street. He said nothing for so long that Norah couldn’t predict his response.

“No.” She almost laughed. “But I talked with a counselor and discussed my options.”

“You want to give up your baby?”

Both hands now rested on her bulging torso. “It’s not about what I want or don’t want. I have to think about the baby and what’s best for him or her. Let’s face it. I’m a mess. I’m not ready to be a mom, definitely not a single mother. I don’t have a job. Crap. I don’t even have a mother to teach me how to be a mom.” The last words caught in her throat.

Jimmy reached out and put his hand on top of hers. “Sweetheart, I told you, you’re not alone. I meant it.”

“I know you did. But this baby isn’t your responsibility any more than I am.”

“You are mine. Mom would’ve expected it.”

“Life isn’t about fair. It’s not fair that we have a whole family full of siblings to look out for each other and some people have no one. We can’t control fairness.”

“I want my baby to have a shot at a good life, one with parents who love and want him or her.” She swallowed hard. She hadn’t voiced these ideas to anyone and they hurt. Feeling incompetent stung.

“It’s up to you and I’ll support whatever you want.”

She blinked away unshed tears. “Who are you? Jimmy O’Malley would never just offer blanket support without telling me what to do.”

“We’ve all done some growing up.”

“Mmm-hmm. I think Moira has a whole lot to do with that.”

They sat in silence for a few minutes. Then Jimmy stood. “I’m going in to see Dad and say hi to Kevin. Don’t rush your decision. You have time. You have to be completely sure.”

She nodded. “I know. I haven’t done anything but think and talk about it, but I like what the adoption counselor had to say and I’m leaning in that direction.”

With his hand on the rail to go up the steps, Jimmy asked, “Do I want to know what the guy’s reaction was to the pregnancy?”

“Probably not.” She couldn’t look him in the eye when she admitted that.

Jimmy bent over and kissed the top of her head. “Say the word.”

He said nothing more, but his intention was there. All she had to do was open the door and he’d go after Avery. He meant for it to be protective and sweet, but it was kind of scary.

Enjoy this quick interview with Shannyn:

I’m a former English teacher who has always loved to read. However, it wasn’t until I stayed at home to raise my kids that I discovered romance. I began devouring books and the urge to write one hit me. That first manuscript sucked, but I kept at. Being a writer is one of the best jobs in the world.

What was the inspiration for Under Your Skin?

The For Your Love series is actually a spinoff series from my O’Learys series. Jimmy O’Malley, the oldest O’Malley is the hero in Catch Your Breath (O’Learys #4). As I wrote that book and introduced all of the O’Malley siblings, I kind of fell in love with them and knew I needed to write their stories.

Under Your Skin is Norah’s story. She’s the youngest O’Malley and when we first meet her in Catch Your Breath, she shows up at home 7 months pregnant. In all honesty, when I decided the write the O’Malleys, I wanted to skip ahead in time and not have to deal with Norah’s pregnancy, but that felt like cheating, so I wrote Under Your Skin picking up right where Catch Your Breath left off, with Norah 7 months pregnant and the baby’s father unaware.

Tell us about the For Your Love Novels.

The next book in the series is In Your Arms, which is Sean’s book. Sean is a live-and-let-live kind of guy, out for a good time. He meets Emma when her car breaks down. Emma knows the kind of guy Sean is—a motorcycle-riding, tattooed mechanic. He’s her total weakness, but everything she’s decided she needs to avoid.

The third book in the series is Through Your Eyes, Tommy’s book. Tommy is a tattoo artist who falls for a cousin of the O’Learys who’s visiting from Ireland. Their relationship is complicated from the start because Deirdre has a steady boyfriend back home (who urges her to date) but no matter how much she and Tommy like each other, she is expected to go home. Tommy’s willing to risk anything to keep her.

Although I don’t yet have a contract for the final O’Malley sibling—Kevin—I hope to be able to write his story as well. I think it will be a second chance romance where Kevin will have to do quite a bit of groveling to win the woman. It will also have Jimmy and Moira’s wedding in it, which should be lots of fun.

I’m not gonna lie—Norah’s hard to like. She’s young and sometimes selfish and immature. But what I like most about her is her ability to overcome difficulties. She’s really good at shoring up her defenses and soldiering on.

I plan to self-publish a stand alone contemporary this fall and then in December, the next For Your Love book (In Your Arms) will release. After that, I’m not sure.

Shannyn Schroeder is the author of the O’Leary series, contemporary romances centered around a large Irish-American family in Chicago and the Hot & Nerdy series about 3 nerdy friends finding love. Her new series (For Your Love) will release this summer with the first title Under Your Skin.
When she’s not wrangling her three kids or writing, she watches a ton of TV and loves to bake cookies. Find out more at: www.ShannynSchroeder.com
Website | Facebook | Twitter | Goodreads

2 Reply to “Book Tour: Under Your Skin by Shannyn Schroeder”