An all-new, stand-alone tale of two improbable lovers, their daring secret,
and the gamble destined to alter the course of their worlds forever! 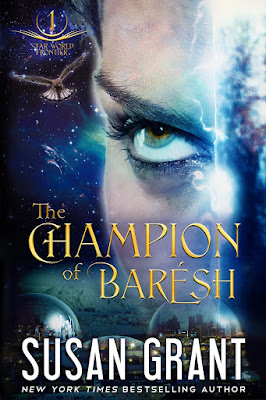 The
Champion of Barésh
Star World Frontier #1
By: Susan Grant
Released May 26, 2016

RITA-winner Susan Grant is back with an all-new, stand-alone tale of two improbable lovers, their daring secret, and the gamble destined to alter the course of their worlds forever!
She was playing with fire…
Jemm Aves battles to keep her dreams alive on a dead-end world. Working for the mines by day, she’s a successful bajha player at night, disguised as a male to be allowed to compete in the colony’s dangerous underworld where club owners will go to extremes to retain the best players. Every win puts her one small step closer to her goal: saving enough to escape Barésh with her family. When a nobleman from one of the galaxy’s elite families recruits her to be a star player for his team, it’s because he doesn’t know her secret. Her ruse proves to be her most perilous game yet when it puts both their lives—and her heart—at risk.
Prince Charming he was not…
Prince Klark is eager to reverse his reputation as the black sheep of the Vedla clan, a family as famous for its wealth and power as it is for being a bastion of male-dominated tradition. If his bajha team can win the galactic title it would go a long way toward restoring the family honor that his misdeeds tarnished. He travels to Barésh to track down an amateur who’s risen to the top of the seedy world of street bajha, offering the commoner a chance of a lifetime: a way off that reeking space rock for good. But his new player comes with a scandalous secret that turns his plans and his beliefs upside down. He sets out to win a very different prize—his champion’s reluctant heart.
BUY NOW
Amazon | B & N | iTunes | Kobo

As soon as Kes left the locker room, Klark turned to the wall and slapped his hands against the cold, tiled wall, keeping them pressed there, fingers spread, willing his hands to serve as anchors to prevent him from going after her.

No mere woman, either. He remembered her as Jemm, the errant Nico’s alleged girlfriend: her long, strong, lean body and the graceful way she moved; that swaying, tempting bottom as she walked away; her wavy hair wild and loose—all but begging for his fingers to be tangled in it as he made love to her.

Damnation. The mental image alone made his body react and his blood run hot. Yet, this same female to which he was so attracted played bajha far better than he ever could. He had come to respect her as an unbelievably talented athlete, had let down his guard around her as a friend, and now she was a beautiful woman, as well? In his world, such disparate qualities could not apply to any one person. Yet, together, they added up to Jemm.

Susan Grant is a New York Times bestselling author who enjoys being able to indulge her love of travel and adventure by piloting jumbo jets around the globe. Her careers as a commercial pilot and air force pilot have provided endless inspiration for her books. Susan is the author of The Star King, launch book of her popular Star series about a spacefaring Earth family, as well as the RITA-winning novel Contact. Her new series debuts in 2016 with The Champion of Barésh. Susan and her family live in the scenic foothills of northern California.
Love to arm-chair travel? Sit down, strap in, and visit Susan’s Come Fly With Me blog at her website
Website | Facebook | Twitter | GoodReads

One Reply to “Book Tour: The Champion of Baresh by Susan Grant”