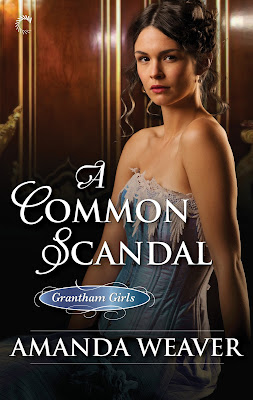 Finishing school taught Amelia Wheeler how to put on a well-mannered performance—when she’s not bored and
looking for trouble. Lady Grantham’s is behind her and now it’s time for Amelia to keep her promise to her dying mother: marry a title and leave her wild days behind.
That promise would be much easier to keep if Nate Smythe hadn’t just reappeared in a London ballroom. The son of an impoverished sailor, Nate—Natty, as he used to be called—has grown up to become handsome, rich and polished. He claims to be looking for a proper bride who can advance his business interests, but that doesn’t stop him from seeking out Amelia every chance he gets. Challenging her. Kissing her.
Suddenly, struggling against her simmering passion is the least of Amelia’s problems—one of her titled suitors
is hiding a desperate secret that could stop Amelia from pleasing her parents or finding happiness with Nate. As a weeklong house party threatens to derail her hard-won future, Amelia must decide: fight against disaster or act like the lady she’s promised to become?
BUY NOW
Amazon | B & N | Google
Play | iTunes | Kobo

Well, I live in Brooklyn with my wonderful husband, who’s a musician and obsessed with Formula One racing, and my daughter. I work in theatre as a costume designer, although more in the administrative side than the design side these days. For several years I’ve worked for a long-run Broadway musical, overseeing their costumes.

Working full-time, raising a daughter, and writing doesn’t leave much time for anything else, so I’m pretty dull on paper. What’s my hobby? Writing. What do I do with my free time? Write. You get the picture!

What is your favorite indulgence (food, spa treatment, etc.)?

Several years ago, I had to give up coffee, so that’s out. All that working, writing, and parenting means the club scene is out, I’ve battled insomnia for several years, so napping is out. I’m on a perpetual diet, so that’s out, too. All I have left is wine, and I’ll cling to that till the end of my days!

What was the inspiration for Grantham Girls?

As a costume designer, I’ve always loved the fashion of the era, and as a history buff, the Gilded Age has always held a fascination for me, particularly the “dollar marriages” between the new manufacturing millionaires and old impoverished European nobility. This whole series more or less revolves around that world, as does the next one, which I’ve just started outlining.

What do you like most about your heroine, Amelia Wheeler?

I’ve had more fun writing Amelia than any other character I’ve ever created. She’s nothing like me, so brash and fearless. She frequently lets her passion get ahead of her common sense, with mixed results, but always with the best of intentions. It was so enjoyable writing such an unconventional heroine who would do and say things I never would.

I’m finishing up a contemporary romance set in the world of Formula One racing (note the in-house expert I have at home!), which will hopefully be the first of a three-book series. And as I mentioned above, I’ve started writing another historical series set in the Gilded Age, tentatively titled The Fortune Hunters. In addition, I’ve always got half a dozen stand-alone book ideas fighting for my time and attention. I need to clone myself.

Amanda Weaver has loved romance since she read that very first Kathleen E. Woodiwiss novel at fifteen.
After a long detour into a career as a costume designer in theatre, she’s found her way back to romance, this time as a writer.
A native Floridian, Amanda transplanted to New York City many years ago and now considers Brooklyn home, along with her husband, daughter, two cats, and nowhere near enough space.
Website | Facebook | Twitter | GoodReads

Despite knowing the sort of marriage she was destined for, she’d resisted making a choice for so long because she’d hoped in time she might encounter a suitable man who sparked some kind of fire in her. But not once, in all her forays into Society, had she met a man who raised more than mild curiosity. She’d read about flaming passions and heated kisses in the lurid, forbidden novels she had traded with Vic and Grace, but her blood had never been stirred by a flesh-and-blood male. She’d begun to think those passions were the invention of novelists and no man could ever make her feel that way. And now one had, and he was hopelessly out of her reach. It was wretched, wanting something she couldn’t have.

“What’s the verdict? Does Cheadle love you madly or not?”

She didn’t trust herself to look at Natty, knowing her insides would plunge in an unwelcome, delicious way. When he came near her, it was as if her whole body stretched luxuriously and unfurled. Terribly unhelpful, when she was determined to send him packing and behave.

“I’m sure the answer will always be ‘not’, regardless of the state of the petals and irrespective of whatever he might proclaim. Isn’t Lady Julia waiting for her glass of punch or something?”

“The lovely Lady Julia Harrow. I saw you sitting with her. Surely she’s missed you by now.”

“Somehow I doubt it,” he muttered. “And what of Cheadle? Surely he’s climbing the walls pining after you.”

She sighed and turned to face him, tossing the last of the ruined flower to the ground and brushing her gloved fingers together. “You know he’s not, Natty. Men don’t pine after me, only my money. The only reason anyone at these things speaks to me is because of my fortune.”

“I’m speaking to you and I have my own fortune, thank you very much.”

“You only speak to me to tease me.”

“You used to like it when I teased you.”

The word hung between them for a moment, rife with meaning. He might have only meant she was all grown-up and out in Society, except his eyes made a lightning- fast perusal of her body as he said it, so fast, he was likely unaware he’d done it. In a rush, it broke over her that Natty was aware of her in the same way she was aware of him. Not as an old playmate from his childhood. As a woman. He was as affected as she was, even if he was spending his evening paying court to Julia Harrow.

His eyes made their way back to hers and they both held the gaze. This newly discovered knowledge sizzled through her body. Her skin flushed and her breaths grew shallow. Natty’s eyes stared into hers. His lips parted slightly, as if he, too, was baffled by this sudden shift in the air. The atmosphere around them felt charged, the way it did when thunder began rattling the windows and lightning lit the night sky, but still the rain refused to fall. At any minute the clouds could collide and deluge the world, but until then, all the energy of the universe danced on the breeze.

2 Reply to “Book Tour: A Common Scandal by Amanda Weaver”