Enter to Win a Print Copy of FORTUNE FAVORS THE WICKED 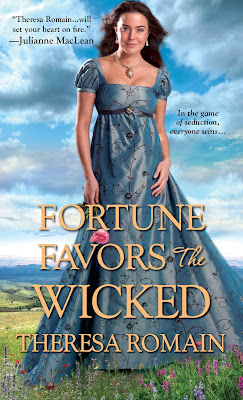 As a lieutenant in the Royal Navy, Benedict Frost had the respect of every man on board—and the adoration of the women in every port. When injury ends his naval career, the silver-tongued libertine can hardly stomach the boredom. Not after everything—and everyone—he’s experienced. Good thing a new adventure has just fallen into his lap…
When courtesan Charlotte Perry learns the Royal Mint is offering a reward for finding a cache of stolen gold coins, she seizes the chance to build a new life for herself. As the treasure hunt begins, she realizes her tenacity is matched only by Benedict’s—and that sometimes adversaries can make the best allies.
But when the search for treasure becomes a discovery of pleasure, they’ll be forced to decide if they can sacrifice the lives they’ve always dreamed of for a love they’ve never known…
BUY NOW
Amazon | B & N | Google Play | iTunes | Kobo

From the Slovene Lands to the South Sea, no place in the world smelled like one’s first whiff of London. The world of the London Docks was acrid from coal smoke, pungent from yesterday’s spoiling fish and the sludgy water of the Thames.

When Benedict Frost was a boy of twelve, new to the Royal Navy, these had once seemed the scents of home, of freedom from the small cage of shipboard life.

Now, as a man of twenty-nine, he would rather encounter them as a farewell before a journey—and the longer the journey, the better. If a ship were a small cage, England was nothing but a large one.

With determined strides, Benedict disembarked from the Argent. He wouldn’t need to stay in England more than a few days. The Argent was leaving port before the end of the week, and he’d be back in his familiar berth when it did. Before then, all he needed to do was to deliver his manuscript to Pitman and arrange payment. The precious handwritten pages were heavy in his satchel; in his right hand, his metal-tipped hickory cane thumped the solid wooden planks underfoot.

He took another step.

“Oy! Frost!” The unmistakable tones of a sailor: wind-coarse and carrying.

Benedict halted, donning an expression of good cheer at being thus summoned. He didn’t recognize the voice, so he said only, “Oy, yourself. How goes your day?”

“Thinking of a treasure hunt. How about you? Goin’ to seek the royal reward?”

The what? Benedict covered confusion with a devil-may- care grin. “Not this time. A man’s got no need to hunt treasure if he makes his own.” He ignored the snigger of a reply, adding, “Good luck to you, though.”

With a wave of his cane that fell somewhere between a salute and a bugger-off, he continued on his way.

But something was off about the Docks. Step by step, it became more obvious. Where was the usual ribald clamor? What had happened to the sailors negotiating with hard-voiced whores, to the halloos and curses as cargo was unloaded? Instead, quiet conversations clustered behind broadsheets, the cheap paper crackling as sailors passed it from hand to hand.

“Theft o’ the century, they’re callin’ it,” muttered one as Benedict walked by. “Aye,” agreed another. “You’d want balls of brass to steal from the Royal Mint.”

Or balls of gold, Benedict thought. Ever since the war with France had begun, England had been bleeding gold—so much gold, the whole system of currency had recently been revised. Still, creditors were reluctant to take paper money or silver.

Benedict couldn’t fault them. He wasn’t interested in those either.

And so he listened a bit more closely to the conversations he passed, easing free of his sea legs with long strides that carried him westward from the docks of Wapping. Miles of pavement, a test of his memory of the city. On every street, the city shifted, with roughened naval types giving way to sedate professionals. But the sounds were the same. Newspapers rustled, and that odd phrase echoed from person to person: the theft of the century.

As the year was only 1817, this seemed a premature declaration. But as Benedict stowed away more overheard details, he could not deny that the crime sounded as audacious as it was outrageous. Four guards had been shot, and six trunks of the new golden sovereigns had been stolen before any of the coins entered circulation. The loss was estimated at fifty thousand pounds.

And that was it. There had been no further clue for weeks, not a single incriminating coin spent. The Royal Mint had just offered a substantial reward for the return of the money.

So. That was the royal reward of which the sailors had spoken. England would soon become a nation of privateers, hunting for coin in the name of the Crown.

Benedict turned over the possibility of joining them. He had attained the frigid summit of Mont Blanc; surely he could spend a few balmy May days to locate a hoard of coins on his native soil. The reward offered by the Royal Mint would allow him to increase his sister Georgette’s dowry from pitiful to respectable.

Tempting. Very tempting. The mere thought of a treasure hunt eased the hollow ache of being in London’s heart. Why, it might be like . . . like not being in England at all. But his manuscript would offer the same reward while still allowing him to depart on the Argent. Just as he had told the sailors: he had already drafted his own treasure. Now it was time to claim it.

He strode forth, cane clicking the pavement with his renewed determination, in the direction of Paternoster Row and the office of George Pitman, publisher.

Historical romance author Theresa Romain pursued an impractical education that allowed her to read everything she could get her hands on. She then worked for universities and libraries, where she got to read even more. Eventually she started writing, too. She lives with her family in the Midwest. Please visit her at theresaromain.com.
Website | Facebook | Twitter | GoodReads

One Reply to “Book Tour: Fortune Favors The Wicked by Theresa Romain”