I live with my husband and our two teenage daughters near the beautiful city of Bath, England – when I’m not writing, I love to read, knit, watch TV or walk the glorious English countryside with my family and our adopted chocolate Labrador, Tyler.

How do you reward yourself for completing a new manuscript.

Great question! First is usually a chilled glass of white wine or bubbly and then I reward myself with a new Pandora charm for my bracelet bought for me by friends for my 40th birthday a couple of years ago.

What was the inspiration for Her One True Love.

Jane (the heroine) appeared as a secondary character in my previous Victorian romance, What A Woman Desires. Although the books can be read stand-alone, the more Jane appeared, the more I knew she had her own story to tell. And she most definitely did!

What do you like most about your heroine Jane Charlotte Danes?

Her kindness, spirit and sense of loyalty – I admire and understand her. She was a great heroine to write and I hope that shows in the book.

Next is the release of the sixth novel in my Harlequin Templeton Cove series – all the books are set in a fictional UK seaside town, but can be read as stand-alone stories. The new book will be released in November and my first book featuring a firefighting hero. I am so excited! 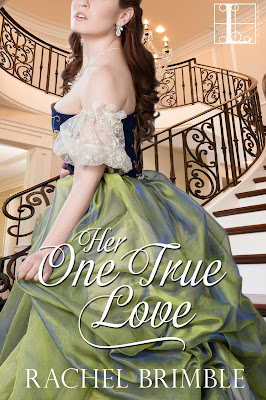 She Can’t Forget Him…
Jane Charlotte Danes has loved the squire of her idyllic country town for as long as she can remember. He is good, kind, and alluring beyond words… and he chose to marry another. Tired of dwelling on her futile longings, Jane plans a move to Bath, where she dreams of a new beginning. But the man who has so imprisoned her heart is only a few steps behind…
He Can’t Let Her Go…
Until now, Matthew Cleaves has
endeavored to meet the responsibilities of his position with dignity and good spirits–including his dutiful marriage. But when his wife leaves him for another man, Matthew is at last free to pursue his one true love. Only one
vital question remains: will the captivating, stubborn, beautiful Jane allow him the challenge, and the pleasure, of winning her back?…
BUY NOW
Amazon | B & N | Google Play | iTunes | Kobo

Jane’s heart ached to see such deep anguish in his gaze. There was no rage, no anger, not even a trace of the moroseness she had seen so many times in his eyes during the preceding months. He stood in front of her as the true, loyal, and honest man she’d always loved and admired.

All the months she fought her feelings for him and now he wished to be with her. Tears escaped and rolled over her cheeks. He brushed his thumbs under her eyes, and it took every ounce of her strength not to collapse against him and damn the right and wrong of her yearning.

“Jane, please understand how hard it is for me to see you cry and not fix things to be with you overnight. What is starting between us, what I am feeling, cannot be ignored.”

Jane took a strengthening breath. “I am not the same woman I was a year, even six months ago, Matthew. I’ve changed. You’ve changed. Neither of us should rush headlong into the idea of us being together when there are so many other people involved.”

She nodded. “And the villagers. And for me, the children at the boardinghouse. I can’t stop my dream to do good now that I have found the courage to pursue it.”

“Everything will work out. I will ensure it.”

He smiled softly, the gentle determination in his gaze seeping deep inside her until impassioned hope squeezed like a vise around her weakening heart.

He brushed the curls from her temple and pressed his lips to her forehead. “I have been blind. My sense of pride and loyalty to my father, a man who thought of me as little more than a cog in his ambitious wheel, has meant I wasted two years with a woman I tried hard to make happy. I refuse to waste any more of my life.”

His words twisted and tore at Jane’s heart. The last thing she wanted him to do was act impulsively and jeopardize anything that might be good for the people of Biddestone. “So what are we to do now?”

Rachel lives with her husband and two teenage daughters in a small town near Bath in the UK. After having several novels published by small US presses, she secured agent representation in 2011. Since 2013, she has had five books published by Harlequin Superromance (Templeton Cove Stories) and three Victorian romances by eKensington/Lyrical.

Rachel is a member of the Romantic Novelists Association and Romance Writers of America, and was selected to mentor the Superromance finalist of So You Think You Can Write 2014 contest.  When she isn’t writing, you’ll find Rachel with her head in a book or walking the beautiful English countryside with her family. Her dream place to live is Bourton-on-the-Water in South West England.
She likes nothing more than connecting and chatting with her readers and fellow romance writers. Rachel would love to hear from you!
Website | Facebook | Twitter | GoodReads

3 Reply to “Book Tour: Her One True Love by Rachel Brimble”