Christine Warner has teamed up with Tasty Book Tours to celebrate the release of her book A Friendly Flirtation (Friends First series #3).  As part of her book tour Christine will be giving away an eBook copy of one of her backlist titles. See the bottom of this post for more information.

I live in a small town in Michigan with my husband, kids, a couple furry friends. I work part time, but my happiest times are spent writing and playing on facebook. I have a slight addiction to that site. Lol I also love to read, cook, and take walks when the weather is a little warmer. I’m already counting down the days to spring. I actually think I started my countdown in November. Lol

How do you reward yourself for completing a new manuscript?

A huge sigh of relief. I actually get kind of giddy and carefree—yep, I’ve even danced around a bit. After I calm myself down the hubs and I usually celebrate with dinner out. It is one of the best feelings in the world to type “The End”. It ranks right up there with holding a paperback copy of your book in your hands. Love. It.

What was the inspiration for A Friendly Flirtation?

I love friends to lover’s/friend’s first stories. I wanted to do a series about three brothers and the ideas pretty much popped right into my head. For A Friendly Flirtation in particular I wanted the heroine to be a little nerdy, a little shy, and somewhat unsure of herself, even though in reality she had so much to be confident about. I also wanted the hero to fall in love with a woman who’d been right under his nose. I love that awakening moment when they really both see each other for the first time.

I like that she’s a woman that most women can relate to. She’s got so much going for her, but the one thing she thinks she’s lacking—confidence—she has in spades but just doesn’t think so. All of the things she goes through in order to change herself takes the confidence she thinks she lacks. I believe most of us can relate to her, and she’s the type of person that you could easily call a friend.

I have so many things pending it makes my head throb when I think about it. Lol

I have 2 completed manuscripts that I have submitted. Now the waiting game begins. J I have a couple more proposals that I want to get ready to submit, and I have outlined another series I’d like to start sometime this year if time allows. I also have a novella I’d like to finish writing—which is the 2nd novella in a series of stores set in the 50s. I’m hoping to self-publish it within the next 4 to 5 months. Fingers crossed.

I actually made my writing goal list for 2016 and it’s pretty ambitious, so I’m anxious to see how much of it I’ll get accomplished. 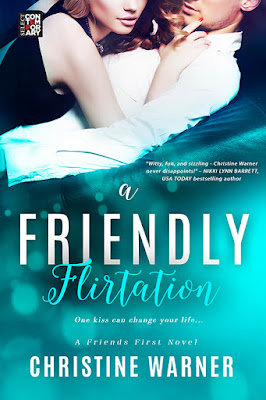 One kiss can change your life…

Allison Hall is fed up with being a social outcast. Even at the tech company where she works for her brother and his best friend, Jared, she’s the invisible nerdy girl. What she needs is confidence—and that requires a makeover and dating tips. And she knows just the man to help…

Jared Esterly is shocked when Allison asks for his assistance and turns her down, knowing that her brother—his business partner and best friend, Nick—would kill him if he dated her, even if it is just for practice. But when Al’s attempt to make changes on her own fails spectacularly, Jared reluctantly steps in. Things heat up quickly, and soon lessons move from the salon to the bedroom.

When overprotective big-brother Nick discovers Jared is dating Allison, their friendship and business partnership sour. Allison, consumed by guilt, must make a choice: stay with Jared, even though that means ruining his friendship with Nick and possibly his career, or leave the one man who sets her on fire.

She leaned her forehead against his chin, then tilted her head back, parting her lips and inviting him in for another kiss.

And he wanted seconds. More than he’d ever imagined. The soft blush creeping over her face, the way her breasts strained against her blouse as she tried to regain her breathing only encouraged him. Holy. Fuck. With her it’d be too easy to forget where the hell they were. And he didn’t like an audience. Not now. With Allison, not ever.

But that didn’t stop him from running his thumb over her bottom lip. For a second he lost sense of where they were when her eyes grew dark and her lashes fluttered gently over her skin. She looked so beautiful, and that protective urge— or maybe he should just call it what is is…lust—overtook him. He couldn’t picture her with anyone but him. Fuck. He didn’t want her with anyone else. Screw Nick. He’d deal with him later.

If anyone would teach Allison how to please a man, let a real man do the job.

She was ready, so was he. He was willing, and so was she. And they were both adults. “Al, I don’t want you with any of these men.”

She sighed, sagging against him. “Are we really going to have this conversation again? I—”

He took her mouth in a hard kiss, parting the seam of her lips with his tongue and thrusting inside, swallowing her gasp. She melted against him. He slid his hands down her throat, past her shoulders, and lower still until he curved his arm around her back and squeezed her rear. She smiled into their kiss, and this time he melted. “Do I need to rephrase?” he whispered against her mouth.

She shook her head, their mouths still touching. “I really only wanted one man in this room, but I didn’t think he wanted—”

“You better be talking about me.” He leaned back just far enough so he could watch the way her emotions flickered across her eyes. Excitement. Uncertainty. Acceptance. She nodded, her lips parted and moist.

“I’m telling you I’ve come to my senses. Or lost them completely.”

Christine Warner is living her dream in Michigan along with her family, one laptop, and a much loved assortment of furry friends.

Besides laughing and a good dose of humor, she enjoys spending time with her family, cooking, reading, writing, but no arithmetic. A confessed people watcher, she finds inspiration for her stories in everyday activities. She loves to read and write about strong heroes, and determined, sometimes sassy, heroines.

A girl gone wild, at least where social media is concerned, she enjoys meeting other avid readers and writers on facebook, twitter and her website at christine-warner.com.

An eBook copy of any one of the following titles: Some Like it in Handcuffs, Two-Timing the Boss, Bachelor’s Special, Secret Love, A Friendly Engagement or A Friendly Arrangement

Don’t Miss Any of the Friends First Romances

2 Reply to “Book Tour: A Friendly Flirtation by Christine Warner”